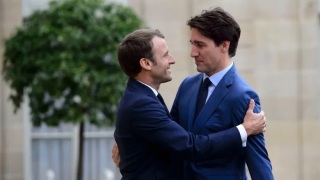 Ahhh Nationalism. The belief that you have to put your country first, encourage economic growth and love of ones nation. According to Trudeau and Macron, the President of France, this is terrible and must be stopped. Why? It’s not like the Canadian economy has been suffering under Trudeau. It’s not like Trudeau has been on a mission to kill Canadian business while lining the pockets of globalist corporations while claiming to fight corporate greed to score votes with his legions of progressives.

It’s not like we are in the middle of an immigration crisis that is costing the Canadian taxpayer over a billion dollars a year, a cost that his party scheduled to reoccur for four years because he decided to allow refugee status to be abused to raise government spending. It’s not like he and his minister of immigration laid out a plan to let 1,290,000 immigrants into a country during that time, one of the largest waves of immigration in history with absolutely no foresight as to how they would figure out which people immigrating were good, and which ones were, I don’t know, ISIS fighters? Drug Cartel Members? You know, those wonderful organizations of people that cost tax dollars to pay law enforcement to fight that do tremendous damage to the system.

It’s not like he gave huge bail outs to corrupt left wing media outlets and spent 7 million on “truth monitiors”.

It’s not like the canadian government and economy is in crisis.

except all of these things are true.

Macron, the french president, is another case of a corrupt ruler promoting socialist values raping the french taxpayers pocketbook like the french economy is just a game for him to play. This game both leaders seem to think they are playing has real life consequences for millions of people.

After getting elected due to poor competition in the french election, Macron pushed extreme leftist progressive values on the french population, and gained one of the lowest approval ratings in the history of french politics (sounds like someone we know).

Thousands of protesters took to the streets in what was called the french revolution 2.0, where riots broke out that lasted for over a week.The Yellow Vests appeared during this time to act as activists against a corrupt government, a country in crisis, and socialism.

So what’s their motivation to kill nationalism? it looks like Canada and France are both in turmoil and economic downturn right now, wouldn’t it make sense to, I don’t know, promote loving our country and improving our own countries economy so we are doing better and don’t have to depend on other nations? All of these things make sense for the Canadian citizen, but not for our corrupt leader Justin Trudeau. Macron is in a similar boat because of his own corruption and tyranny.

It is time for the Canadian public to wake up and realize that Justin Trudeau is declaring financial warfare on the Canadian Taxpayer, and our only chance of surviving as a free nation is to put our country first.

No Bullshit foreign aid, No bailouts, no furtherance of a welfare state and letting in people that are national security risks, no more. Canada First.

I believe I speak for many of my fellow Canadians when I say, we are the true north strong and free. We are not a cuckstate for globalists. And we will not let tyrants kill Canadian nationalism.

I hope you liked article. If you are reading this, and want to stay tuned in to hear the voice of conservative truth, exposing the lies of the Mainstream media and the nationalist populist take and stories about the corruption that is going on in our parliament, follow us on Facebook, subscribe to our blog, or add us on instagram and twitter to get updates on whats going on. We are an independent blog that stands for Canadian Nationalism and a populist view point on politics, and we thank you for reading. We could not do this without Canadian Patriots like you, and appreciate all the support.

2 thoughts on “Trudeau and Macron Team up to Kill Nationalism”